Recipes like Yakitori (“Madame Butterfly”), Game Hens with Rosemary and Garlic (“La Grande Duchesse Garolstein”) and Baklava Damascus (“The Rake’s Progress”) are paired with an opera that’s been performed in Santa Fe over the decades. In addition to menus, each chapter also includes  information about each opera’s debut as well as a detailed synopsis.

Thumbing through the book, I came across an opera I’d never heard of with text by Gertrude Stein, “The Mother of Us All,” about the life of the women’s rights activist Susan B. Anthony which premiered in New York in 1947 and was first performed in Santa Fe in 1976. The menu for this opera reflects Anthony’s New England and Quaker background, with Mock Beef Wellington, Crab Cheddar Chowder and Grasshopper Pie.

The book concludes with a chapter of regional recipes devoted to Backstage at the Santa Fe Opera, including Tamale Pie, New Mexican Grits, Chile Rellenos Casserole and Natillas. This chapter “represents those recipes which are served most often by Santa Fe hostesses known for their high standards of entertaining and for their abilities to utilize local ingredients,” the editors wrote in their introduction. How interesting that back in the early ’80s, there was a focus on locally sourced foods!

“Cooking with the Santa Fe Opera” is a perfect fit for Santa Fe opera lovers, who have long gathered to feast before the performance in tailgates held in the opera parking lot, surrounded by gorgeous mountain and sunset views. Dressed in tuxedos and gowns, or jeans and cowboy boots, people bring impressive spreads of gourmet fare to be enjoyed on linen tablecloths with fine silver and candlesticks or on fold-out chairs perched in the back of pick-up trucks.

Food, in fact, has long been associated with the opera. Chefs once created dishes that honored famous singers, including Australian soprano Dame Nellie Melba, who was in London performing at Covent Garden when, dining at the Savoy Hotel, French chef Georges-Auguste Escoffier created a Peach Melba, a dessert combining“Melba” toast, peaches, vanilla ice cream and raspberry sauce and garnished with chopped pistachios.

Other opera stars with immortal dishes named in their honor include Italian soprano Luisa Tetrazzini, of the turkey and noodle casserole and Italian tenor Enrico Caruso who loved chicken livers so much that several dishes were invented and named after him.

Operas themselves prominently feature food and drink, from drinking choruses and songs to Rossini’s “L’Italiana in Algeri,” in which the heroine stuffs her captor with spaghetti to distract him so she can escape. Perhaps the best known opera tradition related to food is the European “souper,” a feast that takes place after the performance with the musicians and audience members. The meal includes boiled shrimp with , smoked fish, risotto or pasta with truffles and cheese, boiled beef and cakes, all accompanied by lots of sparkling wine and beer. Opera fans will recognize the souper from the second act of Strauss’s “Die Fledeermaus, where party guests dine, dance, drink and sing the praises of champagne.

Melt butter and add shallots, stirring over medium heat until transparent. Stir in shrimp and continue to stir until they turn pink.  Heat and flame cognac in small pan and pour over shrimp, shaking the shrimp in the pan until the flame goes out. Stir in tarragon, cream, tomatoes, salt, pepper and paprika.

Place mixture into shallow baking dish and broil for about 5 minutes, until lightly browned and serve.

Toast almonds on cookie sheet for about 10 minutes, or until lightly browned. Set 12 almonds aside and crush the rest in a blender.

Cut stems off figs. Make a half-inch depression in the stem end of each fig, using a small spoon. Mix crushed almonds, cloves and chocolate and fill each fig with 1 teaspoon of mixture. Pinch figs closed. Arrange, stem side up. On ungreased cookie sheet and bake on middle rack for 5 minutes. Turns figs over and bake an additional 5 minutes.

Press a toasted almond gently but firmly into opening of each gif and serve. Excellent with sherry or port. 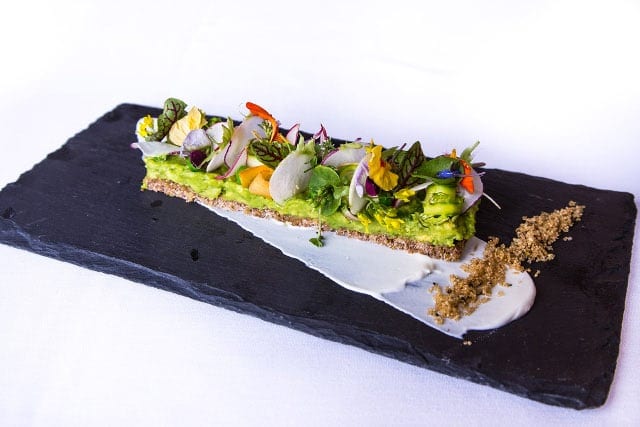 Santa Fe Restaurant: Arroyo Vino Restaurant Deciding on a place for fine dining in Santa Fe can prove to be quite a challenge. You don’t want to be amongst the people that specifically free their time and spend a handsome amount of their hard earned money only to have a bad experience, do you? Instead of uplifting your mood, it’ll just destroy it, but don’t worry, you don’t have to go through that trouble anymore, here’s a restaurant that’s definitely … Read More

If you like Recipes Inspired by the Santa Fe Opera ...Check This Out