Heating It Up | Atrisco Café and Bar

Home » Articles » Heating It Up | Atrisco Café and Bar Graduating from high school in Santa Fe, George Gundrey couldn’t get out of the then-sleepy town fast enough. After years, though, in California’s Bay Area, he was just as excited to return to Santa Fe, with his wife and daughter to accompany him. (They have two girls today.) His initial work was as manager of the Santa Fe Farmers’ Market. Over the two years in that job, he became friends with many of northern New Mexico’s finest food purveyors. When a restaurant space, operated for years by his aunt as Diego’s, became available in DeVargas Center, he jumped at the chance to create the Atrisco Café and Bar. He became a customer, in a big way, of the market farmers he had worked with previously. Atrisco specializes in the foods of northern New Mexico. You’ll find enchiladas, tamales, tacos, rellenos, rice, beans, and posole, of course. If you can’t decide among those dishes, an Atris-combo plate allows you to enjoy all of them. Burritos or sopaipillas can be stuffed with roast beef, ground beef, chicken, carne adovada, a mix of vegetables, or local lamb. On Mondays, George serves chicos, a time-honored horno-roasted sweet corn specialty rarely seen today. The corn kernels are mixed with whole beans in old New Mexican style; the red and green, a balance of flavor and heat.

Other choices include meat loaf or a burger with green chile, or a Southwest-seasoned chicken salad. I pick up bowls of green chile stew here frequently. I sometimes eat the stew “in,” but it travels especially well. There are bowls of both chiles, which can be outfitted as you like with beans and other garnishes.

With the holidays coming up, keep in mind that Atrisco makes trays of to-go foods for 1 to 100. In addition to those trays of enchiladas, tamales, and flautas, I always stock up on quarts of both red and green chile when visitors come to town.

Weekend brunch here is on my regular restaurant rotation. A couple of my friends are partial to the huevos rancheros. My order is most often the breakfast enchiladas, plump with a scrambled egg filling, and crispy hash browns on the side.

Atrisco’s half-dozen margarita varieties all are made with 100% agave tequilas. The basic house version is excellent, but the upgraded Platinum, Silver Coin, and Rio Grande Gold offer even more pizzazz at a reasonable price. The Swirl has loads of local fans. It’s a frozen margarita with a streak of sangria swirled through it. The sangria’s available on its own too. Locally brewed beer is offered on draft. 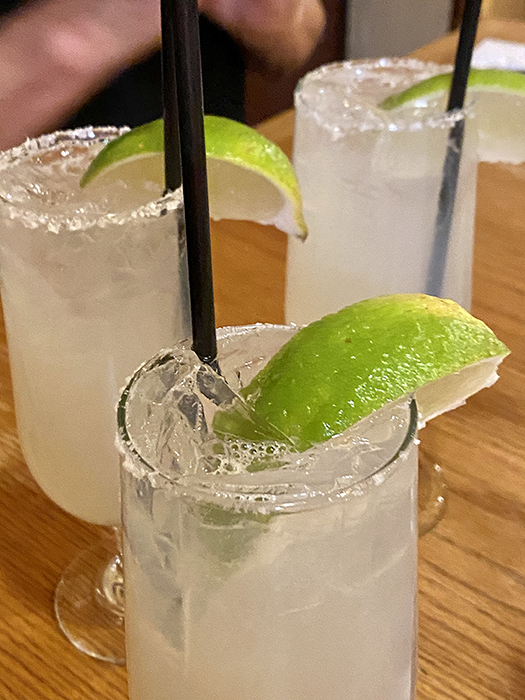 Running successful restaurants seems to be in the DNA of George’s family. His grandmother operated the Central Café in Albuquerque’s Atrisco neighborhood a couple of generations ago. His mother and father had a restaurant, The Mayflower Café, in the space where Café Pasqual’s sits today. After they split up, his mother—Georgia Maryol—bought Tomasita’s, which came with its famed namesake cook, Tomasita Leyba. Georgia moved the restaurant to the Railyard in 1979, where it remains one of Santa Fe’s most successful eateries. George now owns it too, as well as a newer Tomasita’s in Albuquerque. His aunt and uncle, Ann and Jim Maryol, opened Tia Sophia’s, named after the grandmother. More recently, it was taken over by George’s cousin, Nick Maryol. Business is still booming there too.

As mentioned previously, George more-or-less inherited the Atrisco space, which had been Diego’s, owned and operated by his aunt, Toni Maryol. My family has many stories about meals in all of these Santa Fe institutions. One of my favorites was when my then 4-year-old grandson told Toni that he wished he could have a sopaipilla as big as his head. A few minutes later, a crackling golden orb, the size of at least two footballs—and definitely larger than his head—was presented to the tyke.

It’s that kind of hospitality that runs in the family. George and his wife Sally, along with a friendly staff, offer it regularly to Santa Feans and visitors alike. The holidays are widely recognized as the time for giving, which is intrinsic to what makes them so very special. There are always members of our community who need our help, and nobody understands that better than The Life Link, the non-profit organization that spends the entire year improving the lives of those encumbered by homelessness, mental illness, and addiction. This year The Life Link invites you to share in that spirit of giving at their fundraising event, Keep Hope … Read More A tiny hamlet in the mountains of northern Italy’s Lombardy region, Sassella is home to some of Italy’s finest wines. It was also home to Cristian Pontiggia, the brilliant executive chef behind Sassella, the Santa Fe restaurant. Cristian’s been in the U.S. many years now but still takes inspiration from his roots. He mixes tradition with his own sense of imagination, to craft truly stunning Italian dishes. The rest of the restaurant operation—service, wine, and spirits, front and back of … Read More

Talking Turkey! Thanksgiving is Coming! | Heating It Up Top image: Courtesy Bishop’s Lodge. Taken by Auberge Resorts Collection We’re one month out from America’s biggest celebration meal. Many of our local restaurants will switch up their menus for the holiday, to satisfy our desire to eat the classic turkey dinner. Below, you’ll find a sampling of places open for the day. Also listed are some establishments closed on Thursday, that can load you up ahead of time, with all you need to feast at home with minimal effort. … Read More

If you like Heating It Up | Atrisco Café and Bar ...Check This Out Well, who knew? February 22, 2022 (2/22/22!) is National Margarita Day! We wouldn't want to let a day as special as that go by without a little recognition. Whether you sip yours at a restaurant or shake up this delicious frozen concoction yourself, we've got you covered! Here are some recipes you can try as well as a video showing some tempting options from Santa Fe restaurants famous for their margaritas. In a city defined by its culture and majestic landscapes, Four Seasons Resort Rancho Encantado Santa Fe serves as the ultimate destination for everything from family-friendly vacations to solo trips this spring for an enchanting high-desert retreat complete with brand-new artistic and outdoor adventures. With room rates starting at $895, Rancho Encantado is a luxury boutique resort comprised of 65 intimate casitas set within a vast 57 rolling acres in the Sangre de Cristo foothills. The palatial escape is steeped … Read More