What do you do when you can’t have fireworks for your 4th of July Fireworks Spectacular? You pull out the big guns and turn the evening into a concert event that will light up the night! This year, Fourth of July will be fireworks free in Los Alamos, due to recent wildfires and drought conditions. To make up for the loss, organizers Enterprise Bank & Trust, Los Alamos County Community Services and Sancre Productions have invited fan favorite Chevel Shepherd to give a FREE community concert at Overlook Park in White Rock.

Chevel endeared herself to audiences nationwide as the 2018 Season 15 winner of The Voice. Hailing from Farmington, New Mexico, she is a true native spirit, whose star is on the rise as a country singer and an actress. Since winning the reality show, she has released several popular singles on streaming platforms, a well-received Christmas album, an eagerly anticipated EP, and has starred in the film Wildfire, inspired by a country song of the same name by Michael Martin Murphy. She’s also gained a following in her home state.

In their 2019 Los Alamos Summer Concert Series Lineup, Sancre productions brought Chevel to Ashley Pond and drew what is still the biggest concert audience in the history of Los Alamos County.  “We are so happy to have her back to Los Alamos this July 4th, we may not be able to have the fireworks this year, but she is sure to put on a spectacular show in their place” said Sancre Productions spokeswoman Monica Griego.

Charismatic cowboy balladeer Austin Van hails from Ponderosa, New Mexico, and made his first appearance on the Los Alamos Summer Concert series stage in 2021. His debut album Music Road, dropped in July of that same year. A regular at the Coyote Country store in Gail, Texas, it was recently announced that Austin will be awarded the Coyote Country Rising Star award at the venue’s year end performance in October of this year.

In addition to the music, the Los Alamos July 4th Spectacular will include nonprofits, exhibitors and food vendors, so pack up the family and head out to Overlook Park for an evening of fun and excitement. You won’t even notice the fireworks are missing.

Best Things to Do in December 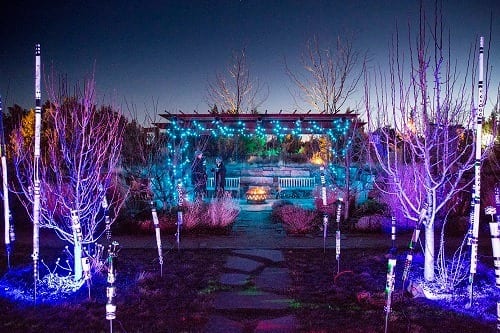 The holiday season in Santa Fe is a magical time, filled with revelry, joy and light. The city is aglow with farolitos and trees wrapped in colorful lights. Caroling, holiday parties, open houses, and community celebrations spread good cheer throughout the city in this final month of the year. Nowhere else can you experience the timeless traditions of three cultures—Native American, Hispano, and Anglo—interwoven into pageantry, splendor, and fun for the whole family. Walk through an enchanted garden filled with … Read More Visit a street dedicated to the country’s finest art. On a road that encourages a pleasant stroll, you will be… If you like Chevel Shepherd Lights Up The Fourth ...Check This Out Every year, the International Mountain Bicycling Association recognizes locations with outstanding mountain bike trails. Santa Fe was recognized as a 2014 Silver level Ride Center. IMBA’s Ride Center award recognizes large-scale mountain bike destinations that offer a wide range of trails for every riding style. According to IMBA, “Ride Centers not only invite you to plan a multi-day trip with your full quiver of mountain bikes and the whole family, they take care of you both on and off the … Read More