In America’s oldest capital city, dining out can take you to some fascinating historic places. These include one of the country’s few remaining Harvey House hotels, a fashionable 18th-century downtown hacienda and and a stylish restaurant with interiors by acclaimed designer Alexander Girard. A meal at any of these local landmarks will leave a lasting impression, and not just because of the acclaimed cuisine served there.

As you sit in these storied spots and savor the memorable flavors of upscale Southwestern cuisine along with contemporary, global and eclectic fare, you can’t help but note the remnants of past eras that surround you. From ancient architecture to thick adobe walls, traditional kiva fireplaces and rambling outdoor gardens, this rich history is uniquely Santa Fe’s. And it elevates your dining experience with an ambience is just as alluring as the food. Here’s a look at some of Santa Fe’s lively local landmarks that are known as much for their past as they are for a place to enjoy culinary excellence.

Up on Canyon Road sits a handsome adobe house built in 1756 by Geronimo Lopez, a soldier in the Spanish army. His property included an apple orchard and farmland. More than 250 years later, his residence is home to Geronimo, one of Santa Fe’s most storied restaurants, where fresh fruits, vegetables and other fare are served in dishes Lopez could never have imagined. Geronimo’s award-winning cuisine, from executive chef Sllin Cruz is served in romantic surroundings of rustic wood beams, kiva fireplaces and thick adobe walls. Dining in the front room, imagine what a gathering of New Mexico politicos may have looked like in the 19th century, when the prominent Borrego family owned the house and renovated it with Territorial-style architecture. Or take a seat beneath the long portal, and envision what Canyon Road was like when it was just dirt trail leading from the mountains to the downtown plaza.

Geronimo’s elegant ambiance blends well with its history and even though the creative cuisine is contemporary, the menu gives a nod to the area’s past. You may find a few seasonal ingredients like the ones Lopez grew on his farmland on the menu here. Try the New Mexico Four Corners grilled rack of lamb, served with fresh pea purée, Parmesan polenta cakes, roasted leeks and Merlot-lamb reduction, or the Telicherry rubbed elk tenderloin, with roasted garlic mashed potatoes, applewood-smoked bacon, sugar snap peas and a rich brandied mushroom sauce. As you leave, marvel that Lopez’s adobe house has stood for so long, in the same way that Geronimo—recipient of the AAA Four Diamond—has reigned over Santa Fe’s dining scene for more than two decades.

The stately La Fonda on the Plaza occupies what is likely America’s oldest hotel corner. Various inns have stood on the southeast end of the Santa Fe Plaza ever since Spanish colonists established the first lodging in 1610. In 1925, the Atchison, Topeka Fe Railway purchased the hotel and leased it to Fred Harvey, who turned it into one of his famous Harvey Houses, built to serve the railway line and known for its high standards and outstanding hospitality. Step inside this historic treasure and you’ll travel back through history to the Harvey House heyday. Distinctive interiors created by Harvey’s architect and interior designer Mary Colter, with the help of Santa Fe architect John Gaw Meem include Pueblo and Spanish styles. Highlights included a 25-foot cathedral ceiling, hand-carved beams and stained glass skylights. La Fonda was Santa Fe’s gathering place. “You never met anybody anywhere except at La Fonda,” syndicated newspaper columnist and New Mexico resident Ernie Pyle once wrote, “You never took anybody to lunch anywhere else.”

Take a seat in La Plazuela, located on the hotel’s original 1920s patio, for an innovative twist on New Mexican cuisine. Executive Chef Lane Warne continues the high standards of Harvey House chef, Konrad Allgaier, who combined his classical European training with the flavors of traditional New Mexico cuisine at La Fonda for nearly 25 years. Dishes such as the table-side guacamole, classic French onion soup and Dungeness crab cakes are items that may have appeared on the Harvey House menu. Or you can try chef specialties such as pan-seared Alaskan sockeye salmon and venison loin. Northern New Mexico dishes include red chile pork tamales, enchiladas del Norte and rellenos de la Fonda.

Just off the Plaza sits a fashionable Territorial style hacienda built in the mid-1800s by one of Santa Fe’s wealthiest families. Major Jose Sena and his wife, Isabel expanded their home over the years to accommodate their 11 children, eventually creating 33 rooms. The property boasted a second-story ballroom on the west wing, along with servant quarters, a coach house and stables. In its heyday, the house at Sena Plaza was a popular place indeed. Today, the hacienda still draws crowds to visit the various shops that occupy the hacienda’s old rooms, to enjoy the

lush, beautiful gardens that fill the courtyard and to dine at La Casa Sena. Chef José Rodriguez’s New American cuisine incorporates the ingredients and influences of global as well as New Mexican cuisine. Some of the items on his menu may well resemble what the Sena family might have eaten at family meals or fed their many guests, including grilled Colorado lamb rack, pan-seared Ruby trout and traditional enchiladas.

One of Santa Fe’s most venerated restaurants, The Compound is widely celebrated for its creative cuisine from owner/chef Mark Kiffin, winner of the coveted Best Chef Southwest James Beard Award. But it’s also revered for the artistry of its interior, created more than 50 years ago by acclaimed designer Alexander Girard, who donated more than 100,000 pieces from his collection to the International Folk Art Museum.

The restaurant occupies what had been the centerpiece of the McComb Compound, a group of 20th-century houses on Canyon Road. When the house was converted into a restaurant more than half a century ago, the owners commissioned Girard to do the interiors. Any visitor who’s been to Santa Fe’s folk art museum will recognize some of Girard’s private folk art collection incorporated into his designs here. He also designed The Compound’s logo along with dinnerware, napkins and other details.

Girard was well known for his the restaurants he designed, including La Fonda del Sol and L’Etoile in New York City, but The Compound is the only remaining one. A meal here—featuring such signature dishes as Maine lobster carbonara, wild mushrooms and organic stone ground polenta with black truffle relish, and the beloved chicken schnitzel—is more than just a sumptuous feast, it’s a chance to admire work by one of the 20th century’s most influential designers.

A Short History of Joe’s Dining 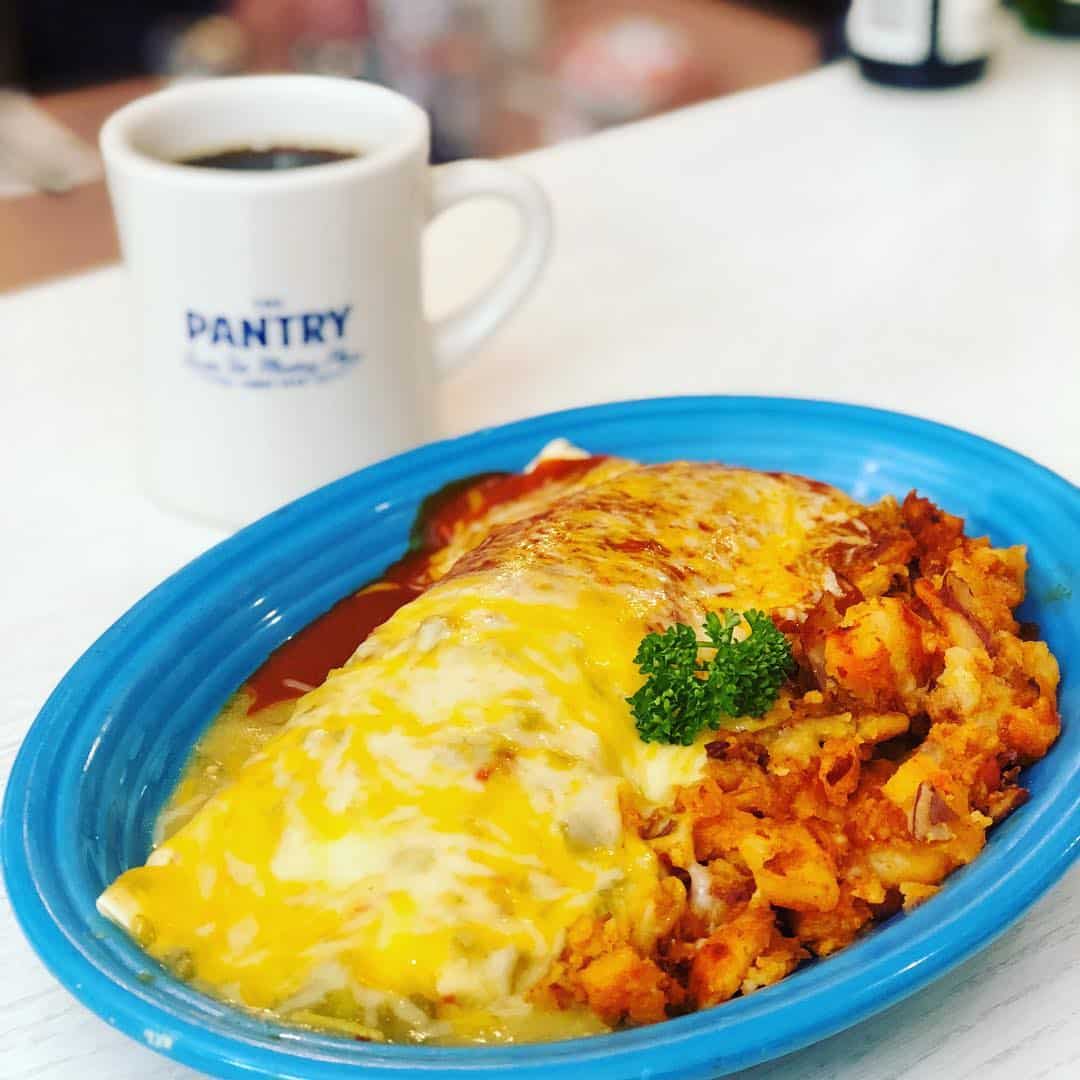 If you like A Short History of Santa Fe’s Dining Landmarks ...Check This Out

Comfort Food to Feed the Soul Comfort Food to Feed the Soul

One of the best things about warmer weather is getting to spend time outdoors. Of course, Santa Fe offers plenty of glorious parks and other places for picnics, walks and just relaxing on a bench, but when you’re looking for something more — conviviality, ambiance, great food and live music — the city’s got lots of spots for that, too. From rooftop bars with stunning sunset views to ground-level patios perfect for people watching and catching live music as you … Read More