From Chaos to Complexity: Where Do Art and Science Meet? - SantaFe.com Hanging out at MOCNA can be quite rewarding – even provocative. By its very nature, an institution with such a challenging title as Museum of Contemporary Native Arts should be expected to present programming that challenges preconceptions. First and foremost, there’s the big concern: Are contemporary Native arts necessarily different than the so-called regular contemporary variety? And if so, how and why? Setting aside an attempt to answer these questions—although I suspect we might seek resolution in MoCNA’s latest offering, the Social Engagement Residency Program—the fact is that there are no other museums of contemporary Native arts in the United States, at least none that I’ve ever come across. Either Santa Fe is at the head of its class in this area, which I maintain is distinctly possible, or the rest of the country is correct to ignore the category. Given how well the U.S.A. pays any attention at all to its indigenous populations, ignoring such notions as “contemporary Native arts” is very likely, though hardly for admirable reasons. It’s more to be expected that most of this country doesn’t even realize there is such a thing.

With a willingness, even a mission, to challenge mainstream concepts about contemporary art and culture, other matters can quickly get added to the mix of subjects under investigation at the museum. One such topic is gender, as it is perceived in Native communities and at large. This turned out, at least for me, to be a potent subtext when MoCNA presented, with the Santa Fe Institute (SFI), a panel discussion titled From Chaos to Complexity, the third in their ongoing Art + Science series. The panel was moderated by former C.I.A. spy Valerie Plame Wilson, director of communications at SFI. (Mysteriously, SFI’s website remains mum about her position; is this merely an insignificant omission?) Basket maker Shan Goshorn, an Eastern Band Cherokee artist and activist, shared the stage with SFI researcher Jennifer Dunne, who is currently working on food biosystems. On the flyer that accompanied the discussion, the model Dunne had put together to look at who eats whom in the food chain was as intricate a work of art as one of Goshorn’s baskets. This is no trivial thing; Goshorn is known for her use of traditional exacting patterns in her contemporary baskets, which make statements about indigenous history. She uses shredded giclées prints in place of river cane so that she can illustrate her concepts, literally, in pictures. The mathematics of her artworks is tricky; it was her young son who pointed out that “all math is patterns.” Dunne agreed, affirming that even in so-called chaos—science’s chaos, not the public’s perception of it as randomness—there are discernable patterns.

Now, back to gender. I noted that Wilson asked the two panelists what led them to become an artist and a scientist, respectively, and who had nurtured their creativity and intelligence. When I inquired as to whether she would have asked the same questions of men, Wilson replied that she has, indeed, asked those very questions when the panelists were both male. I am tempted to quibble and put forward the issue of the fetishization of Native artists (each panel consists of an indigenous artist and, it would seem, a non-Native scientist). If the panels had consisted of two males of a certain age and European descent, would the questions be the same? To let Wilson off the hook, I admit that mainstream society might find “artist” or “scientist” such a bizarre career choice that the question of how you get there has to be asked. I have a gut feeling, though, that there is a kind of exoticizing at work here, and would like to offer a challenge to both institutions to probe the matter more deeply. And while we’re at it, I have to admit that I found Wilson’s questions somewhat shallow. Goshorn and Dunne are highly intelligent and articulate women with a great deal to say about the state of art, science, and being human. Had Wilson been advised to dumb down the topic? If so, she was sadly misdirected. Even the use of the term “chaos” was mishandled, which must have proven frustrating for Dunne. At one point, Goshorn talked about the “chaos” in her studio as she figures out the workings behind a basket. She meant “mess,” I believe, but no one corrected the misuse. This is a place where a moderator could skillfully and graciously swoop in and allow for a defining of terms and ideas; that the opportunity was passed over is unfortunate. 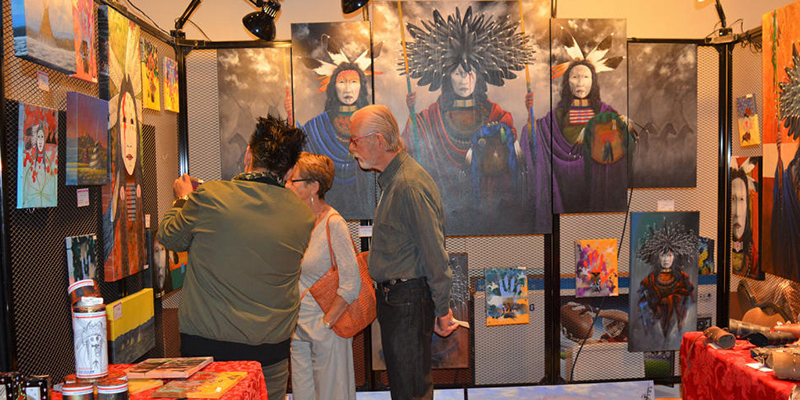 Walter W. Nelson is a good photographer. I say that to distinguish him from the legion of digital-age shutter jocks who have proliferated like mold in a forgotten tub of potato salad ever since Adobe released its first version of Photoshop and Nikon put a scanning element in the back of one of its venerable SLRs. A series of his studies of Georgia O’Keeffe’s beloved Black Place in the Bisti Badlands of Northern New Mexico were exhibited last month at … Read More

If you like From Chaos to Complexity: Where Do Art and Science Meet? ...Check This Out As fine art collectors and enthusiasts from around the world gather in small groups and virtually in Santa Fe, New Mexico this year, they will have the unique opportunity to experience the second official, ‘Sovereign Santa Fe‘ art exhibit. Sovereign is a curated Contemporary Native American Arts exhibition showcasing cutting edge indigenous creativity. Sovereign’s mission is to create a platform and highlight NewSchool Native American Arts and its elusive relationship between traditional and contemporary. Organized by FaraHNHeight Fine Art, Tony Abeyta, and Randy L Barton and … Read More