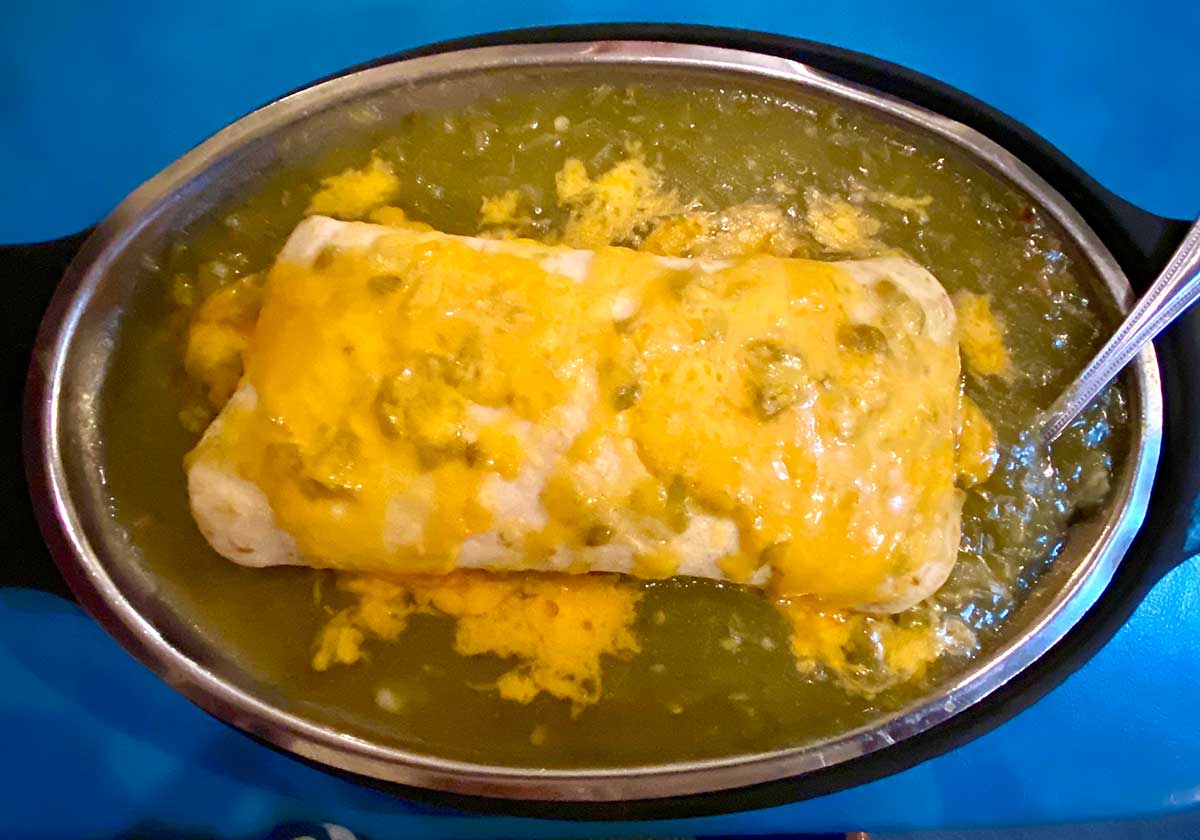 I find so much to love about the deceptively humble restaurant Tia Sophia’s. A couple of Sundays ago, I was asked by friends to meet for breakfast at my choice of Santa Fe restaurants. My morning shortlist includes various time-tested classics — Café Pasqual’s, the Plaza Café, a trio of Pantry’s, and Tia Sophia’s, among others. That time, I chose Tia’s, a vision of its breakfast burrito dancing in my head. Santa Fe’s awash in fine examples of this hearty way to start the day, but I’m completely enamored with the Tia’s version. My heart’s racing now, thinking about that zeppelin blanketed in molten cheese and chile. The red’s good but, oh, the green’s phenomenal.

When I landed in Santa Fe in 1980, I was told by multiple new friends that I had to go immediately to Tia’s to check out that burrito. I took their advice. More often than not, it’s still the breakfast dish that I order. Occasionally I try the excellent huevos rancheros or the pancakes, or when I get there during the lunch hour, my choice runs towards the enchiladas. It’s the breakfast burrito awash in green, though, that calls me, even after all these years.

Some four decades later, only a few things have changed at the family-owned institution. Back then, the restaurant was across San Francisco Street and up the block from today’s location. When the founders — Ann and Jim Maryol, parents of current owner and proprietor Nick Maryol — made the move, they hauled along the café’s distinctive high-backed wooden booths from the original location. Spaghetti eventually disappeared as a lunch special, replaced by additional New Mexican fare. When Nick took over in the early 2000s, he added fried bologna to the bacon, ham, and sausage options, and at his wife’s behest, put nachos and Frito pies on the lunch menu. A decade or so ago, as gluten intolerance became well-documented, Nick decided to eliminate wheat flour from Tia’s chile sauces. He agonized about the decision, though, worried that patrons might balk at the new cornstarch-thickened versions. There wasn’t a single complaint. I didn’t even notice. On the recent Sunday, server Margie waited on our group. It struck me, in chatting with her, how I love much more than the burrito here. Like all the servers, Margie was the epitome of brisk efficiency, while cheerful and gracious. I was delighted to find out she was the daughter of veteran server Adilia, whose son works in the kitchen. Adilia, along with Cathy and Carl, have been pampering customers for longer than the 16 years that Nick has owned Tia’s. Another kitchen hand, Santos, has been frying up the flaky sopaipillas since prior to Nick’s parents’ retirement too. In a business fraught with lightning-fast turnover, longevity and loyalty like this is remarkable. That attracts loyalty among patrons as well. While plenty of Santa Fe visitors stop in at Tia’s, it’s more frequently locals, including most of the city’s politicos, filling the tables and digging into those steaming platters. I’ve sealed many business deals and marked life passages here, both celebratory and sad, always comforted by the warm welcome as well as the food.

Nick obviously has a talent for running a restaurant, which seems to extend through the Maryol family. His parents named Tia’s for his dad’s mother, Sophia, who ran a café in Albuquerque’s Atrisco neighborhood. He has close relatives who own Tomasita’s and Atrisco Café, as well as the late, often lamented Diego’s. Nick studied mathematics and sociology at NMSU, went on to learn Japanese at the University of Arizona, and later studied international business at Thunderbird College in Phoenix. Like many kids growing up in the ‘80s, he had a fascination with anime, the distinctive Japanese form of animation, and that blossomed into a love of Japanese culture and a desire to pursue business there. He spent several years in Japan after college. Eventually though, he returned to New Mexico, putting his business background to work at Thornburg Investment Management. When Nick’s parents chose to retire, he decided he could use those business skills in the restaurant he knew so well.

Which leads me back to the food, and that burrito, that exceptional burrito. While New Mexicans have eaten tortilla-wrapped morning foods forever, it was Nick’s dad who most likely coined the term “breakfast burrito” and printed it on a restaurant menu. You can load the dish up in all kinds of ways, including red or green, or red and green, often called Christmas, a now-popular term coined by former employee Martha Rotunno. Some people quibble that you have to pay $1 extra to blend eggs into the hash brown and meat filling. Personally, I look at it as a savings of $1 for an ingredient I don’t particularly need in this flavor bomb. The burrito’s so hefty too, that I usually take half of it home for another meal.

On Sundays, Tia’s serves its breakfast menu from the 8 a.m. opening until the 1 p.m. closing. Other days, to snag a burrito, you have to arrive during the breakfast shift hours, from 7 a.m. to 11 a.m. If you show up after 11, you can choose among plenty of other dishes — New Mexican, burgers, sandwiches, salads, and more — before Tia’s closes at 2 p.m. Expect a wait, but the line moves along efficiently, like everything else here. I hope you’ll be equally smitten.

Hungry for more breakfast ideas? Read about the 7 Best Breakfasts in Santa Fe! When planning a festive evening out, nobody exclaims, “Let’s go have a nice chicken breast!” Or so says a Texas steakhouse owner friend of mine. In interviewing the owners of Santa Fe’s Market Steer Steakhouse, Kristina Goode-Crook and Kathleen Goode-Crook, that remark comes up in conversation, and they laugh in agreement. Steakhouses really are the definitive American-style celebration restaurant. Theirs is also a celebration of New Mexico and its agricultural heritage. RIDE ‘EM, COWGIRL Chef Kathleen grew up, riding and … Read More If you like Heating It Up | A Love Letter to Breakfast Burritos ...Check This Out