When Hue-Chan Karels and Nikki Tran met in Saigon last autumn, the two chefs felt an immediate connection. The most obvious was their shared experience as Vietnamese who became refugees after the Fall of Saigon in 1975. Hue-Chan, the proprietor of Santa Fe’s Open Kitchen, says that she and Nikki immediately bonded, too, as creative chefs and women entrepreneurs.

Hue-Chan had returned to her ancestral home to lead a culinary tour group, one of Open Kitchen’s ambitious series of activities and events. She had contacted Nikki, chef-owner of Kau Ba Quan, about preparing the group’s welcome meal upon arrival in Saigon.

Nikki not only wowed the group with the local flavors but mixed in some of the Viet-Cajun fare — such as a crawfish boil — that she’s known for in her restaurant of the same name in Houston. She also enthralled the group with her spirited stories about finding her way as a neophyte chef and restaurateur in both countries. Hue-Chan decided then and there to invite Nikki to Santa Fe.

She’s coming soon — Tuesday, January 17 — to be guest chef for an 8-course extravaganza of specialties from throughout Vietnam. You may already know Nikki’s name from her American TV appearances on Somebody Feed Phil, David Chang’s Ugly Delicious, and Street Food: Asia. For this “Vietnamese Cuisine Reimagined” dinner, she’ll include tastes from as far north as Hanoi and Saigon in the far south. That’s comparable, distance-wise, to Los Angeles and Portland, with the stylistic differences you’d expect from their diverse climates.

For a little teaser, her dishes will include meatball banh mi, spring rolls with scallops and pork, mustard green beef rolls, crab soup, and rambutan (a lychee-like fruit) salad with dried salted prawns and lime-fish sauce vinaigrette. Grilled shrimp with betel leaves and kumquat dipping sauce, braised and caramelized mackerel, and pork belly with sticky rice and assorted pickles round out the savory courses. For the finale, Nikki will whip up a Cajun-influenced banana and peanut dessert. Find more detailed descriptions of all the dishes on openkitchenevents.com.

I’ve had the pleasure of enjoying a number of Open Kitchen’s other Vietnamese and Asian-inspired meals over several years, in cooking classes, occasional dinners, and catered events. The food created by Hue-Chan and her executive chef Erica Tai has been impeccably fresh, beautifully presented, and simply scrumptious. I thoroughly expect this collaboration with Nikki to be a culinary highlight of the year. If you miss the chance to attend this, do yourself a favor and get on Open Kitchen’s mailing list, or follow the business on social media, to know about all their happenings. I always appreciate that Hue-Chan’s events celebrate the kitchen and shared food experiences as the center of community and creativity.

In talking with Hue-Chan about the upcoming collaboration with Nikki, she said, “We both see Vietnamese cuisine as our cultural heirloom, one that’s portable and lives within us, wherever we go. Our journeys have had, at the core, the passion to learn about our cultural identity through the lens of food. We are excited to rediscover, revive, and reimagine Vietnamese heirloom recipes through family histories and memories of flavors.”

Come join these extraordinary women at the table.

January 17, 2023
Eight courses, $165 plus tax and gratuity
Option of a cocktail and wine pairing for another $100
Reservations are required. This event will take place at Opuntia, a handsome restaurant in the Railyard. Seating will be limited, so sign up now. 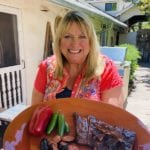