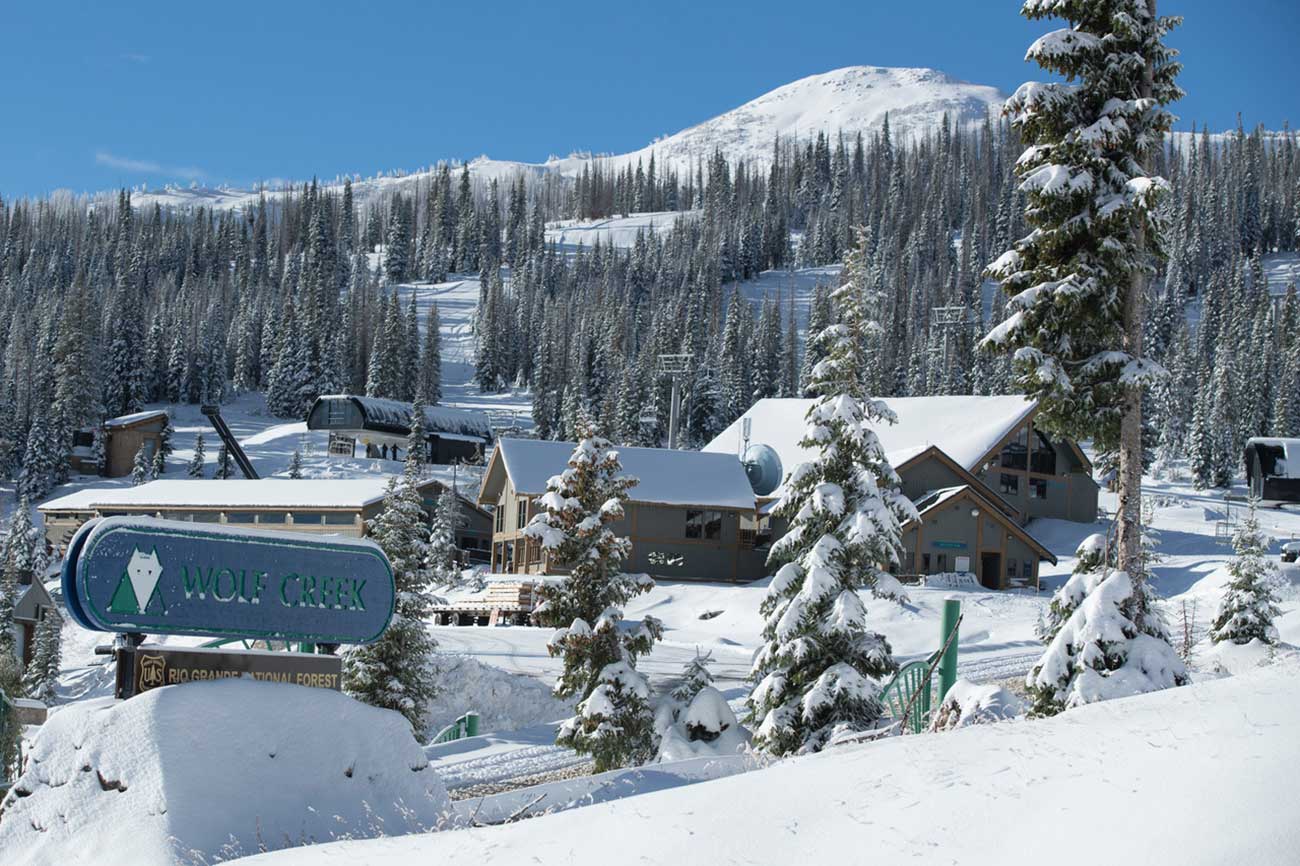 Wolf Creek & Pagosa Springs:
A Visit to the White Realm

Count me among the most fortunate of in our corner of the world, as I just returned from a ski outing to Wolf Creek and the charming town of Pagosa Springs, Colorado.

On the drive north, we entered the white realm as we reached the higher elevations near Chama, after climbing out of the stunning orange, yellow, and tan sandstone cliff and mesa country around Abiquiu. The land lay locked under a blanket of white, with frosted trees, rivers slipping silently beneath mantles of ice, and homes burdened with snow piled high on their roofs.

We came expecting to find hardpack conditions on the mountain, but the night prior had delivered five inches of fluff, and

the previous two days 10 more inches. It continued to snow off and on all day, with temperatures in the low 20s, so the snow stayed light and wonderfully carvable.

We set out to systematically sample the goods, working our way across Wolf Creek’s broad face of as it tumbles off the Continental Divide, which forms the ski area’s southern boundary. Our first run was under the Raven Chair on Gun Barrel where only a few people had left their etchings, then it was into the area’s fantastic woods, popping out onto runs for a few turns than diving back in to the trees.

We eventually found ourselves on the Alberta chair, which accesses the most isolated portions of Wolf Creek’s sprawling 1,600 acres (in comparison, Taos Ski Valley encompasses 1,200 acres). While we passed on doing any hiking, we still sniffed out run after run of untracked lines, whopping with joy as we slid softly through the old growth forests on runs like Keith’s Glades, Area 5, and Little Bankshot. At one point we probed the snow with our poles, and they sank almost to the handles. Riddled with buried stream channels and other terrain traps, you best ski looking far forward here or you are in for a surprise or two!

The addition a few winters back of the Charity Jane high-speed chair in this sector was a major upgrade, as it allows you to access a new pocket of low-angle but super pleasant glades below the Alberta chair. We did a few laps here just to enjoy the easy-going glides and, again, lack of people, skiing right onto the chair.

Had we been willing on our first day of the season to do some hiking, we could have scared ourselves silly on runs like the Knife Ridge Chutes, sampled the divine trees of Step Bowl, or scraped the low-hanging clouds swirling around Alberta Peak at 11,904 feet. But really there was no need to go hunting powder and interesting terrain; at Wolf Creek on a typical day it is all around you, from one divine edge of the area to the other.

But the great skiing was only half of the pleasure we had on our foray north. Back in Pagosa, we quickly changed out of our ski duds and into robes and sauntered across the parking lot of our accommodation — the venerable and excellent Healing Waters Resort & Spa — and into their thermal hot springs. Considered sacred space by the area’s original inhabitants, the Ute Indians (the name derives from Pah=water and Gosa=stinking or boiling), the waters are a huge additional reason to visit here.

While not as popular as The Springs across the street, Healing Waters is far cheaper, much less frequented, and ushers forth 100 percent mineral water. I love its large pool with moderate temperatures, where you can float on your back while watching the steam rise off the water in billows and vanish above into the black night sky. You see the hydrological cycle at work: water to vapor, vapor to clouds, clouds to condensation, and condensation to precipitation. The steam rising here might very well be the snow falling on top of Wolf Creek Pass as you bob around in the mineral-rich waters.

To the east a huge Christmas star sits on a hillside overlooking town and a massive pine tree in the town’s lovely park along the icy San Juan River is also at hand, bedecked with holiday lights — cheerful beacons in these troubled times.

Inside the men’s changing room is a small pool I’ve nicknamed “The Bone Melter.” At 110 to 112 degrees, you have to limit your time in its embrace, but it is sure to draw out the aches and pains after a day of skiing or a lifetime of hard knocks. The temperature of another outdoor tub that can hold 20 people or so, but is currently restricted to five, is between the big pool and The Bone Melter, so you have a wide range of options here for soaking.

There’s also a tiny steam room in the men’s bathhouse. Sitting here takes some courage, as the steam hisses and gurgles beneath your feet, shooting out in jets then quieting for a few seconds. It seems as if you’re sitting atop a bomb, but what a bomb! Deeply inhaling the steam washes your lungs and opens your sinuses, and it seems you are in the womb of Mother Earth herself. Take a cold shower afterwards and you emerge feeling rejuvenated, cleansed, renewed. And ready to do it all again the next day!

Wolf Creek Ski Area is celebrating its 81st anniversary this winter, and is managed by the Pitcher family, who oversaw the Santa Fe Ski Basin for several decades. Wolf Creek is 175 miles north of Santa Fe, via US 84 and US 160. Driving Wolf Creek Pass on a storm day is not for the faint of heart. The ski area has a 1,600 vertical foot drop (including its hike-to summit) and has nine lifts, including three high-speed chairs operating from 8:30 a.m. to 4 p.m. It averages 430 inches of snow a season, and has received 135 inches already this year. It normally has a handful of places to dine and two bars but is currently offering only limited food service. The best bet is to tailgate or eat a picnic on the sundeck. Walk-up tickets are being sold this winter, but may not be available at peak periods, so it’s best to reserve a ticket ahead of time online. It also has a very qualified ski school program, a sports shop, rentals, and a free network of more than 6 miles of groomed Nordic trails. Peak period adult all-day lift tickets are $90, kids (ages 6 – 12) are $51, and seniors (ages 65 – 79) are $60. Masks are required for all times except when skiing. For details call 800-754-9653 or visit wolfcreekski.com.

Pagosa Springs has a large selection of places to eat and drink, though they are currently limited in operation. These range from pizza joints to coffee shops, with some fine dining options, such as the Alley House Grille and Thai Pagosa, and moderate Lost Cajun. For details, visit visitpagosasprings.com. Healing Waters has kitchenettes, cabins, suites, and standard motel rooms. For details, visit pshotsprings.com

The world’s deepest geothermal hot spring aquifer, as certified by Guinness World Records, is The Mother Spring of Pagosa Springs, which reaches a depth of more than 1,002 feet. It feeds the three commercial soaking operations in town, and a few free public pools along the river. In 1982, the Town of Pagosa Springs constructed a geothermal heat distribution system that warms many downtown businesses, keeps sidewalks clear of snow during the winter, and has even been tapped for heat in the brewing process of Riff Raff Brewing Company.

Daniel Gibson is the author of New Mexico’s only comprehensive ski guidebook, SkiingNew Mexico: Snow Sports in the Land of Enchantment (UNM Press, 2017). He is a member of the North American Snowsports Journalist Association and has written on the topic for newspapers coast to coast, web sites, and magazines including Powder, Ski and Wintersport Business. His first day on wooden skis with wooden edges came at age 6 in 1960 on a snowy day at the former Santa Fe Ski Basin. He can be reached at [email protected] or via www.DanielBGibson.com. What is your passion: fur, feathers, or flowers and fauna? Or perhaps you are an aficionado of rocks and ruins, or the history of Native Americans, Buffalo Soldiers, ranchers and miners? Maybe you look for adventure in hiking, biking, or hunting? All of these interests can be explored with Ted Turner Expeditions on the 156,439 acres of the Ladder Ranch near Truth or Consequences. We met David Barfield, the activities director for Ted Turner Expeditions in Southern New Mexico, at … Read More

Spring is here but thanks to the unpredictable weather – wind, snow, hail, sun, repeat – it’s hard to get excited about doing anything outside. Given that Santa Fe’s last predicted frost date falls on May 20th, it could take a a month or more before the weather in Santa Fe feels fully springlike. So what to do during this in-between time? When these un-Santa Fe-like days offer no sun and it’s too gray and miserable to venture anywhere except to your couch? When … Read More

If you like Snow Trax 5 | Wolf Creek ...Check This Out

A Perfect Fall Day on a Horse