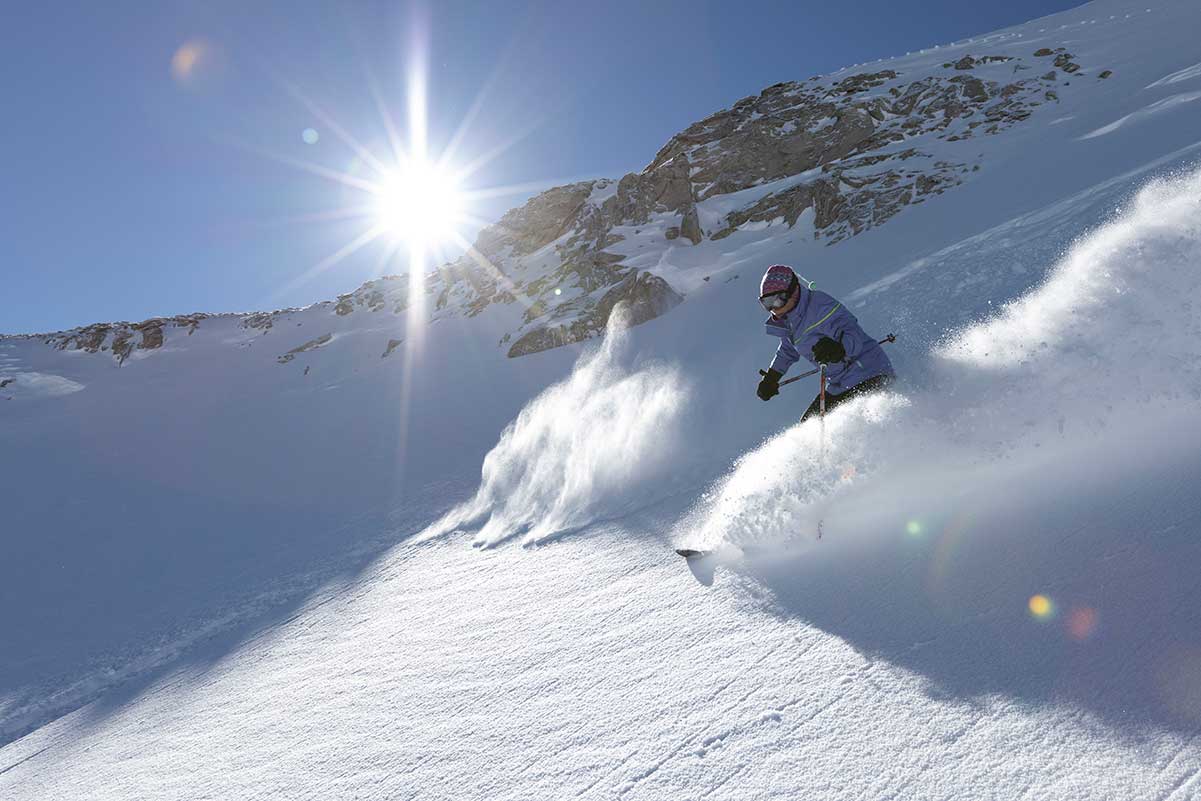 Winter is BAAAACK, and so am I with another season-long round of reports on the regional snowsports scene: events, places, people, news, history, and more. This marks my 30th season for this column, which will run every other week here on SantaFe.com. This first column will look at developments at the ski areas.

But before I begin, I must note how pleasantly surprised we all are at the early signs of a good winter ahead. In many recent years, we’ve begun the season late, and often on thin strips of manmade snow laid over dry ground. Not so this year! We’ve had several significant winter storms already and the base is set, unless we have a sustained warm-up. This portends an excellent season.

Wolf Creek began spinning its lifts on Nov. 4 with some 90 percent of its terrain already open, including Knife Ridge and Horseshoe Bowl, on a mid-mountain base of 32 inches. Arizona Snowbowl, near Flagstaff, opened on Nov. 17 with its gondola providing access to advanced and intermediate trails including Upper Ridge, Midway Catwalk, Logjam, and Wild Turkey. Sipapu followed on Nov. 18 running Lift 2 and Lift 5, plus the beginner magic carpet, with a beginner and the intermediate run Thumper available. It’s open Fridays – Sundays until Dec. 9. Red River will open on Nov. 23 and will operate Fridays – Sundays until Dec. 9. Also opening on Nov. 23, for season-long operations, will be Crested Butte. Taos Ski Valley will open for daily operations on Thanksgiving, as will Purgatory, Ski Santa Fe, and Telluride.

Angel Fire will load its first chairs on Dec. 16. Pajarito will announce opening day as soon as possible, as will Monarch, Ski Apache, and Enchanted Forest Cross Country and Snowshoe Area. Due to poor snow conditions the past few years and difficulties with staffing, Sandia Peak will not be opening at all this winter.

Regional ski areas were also busy off-season working on projects to improve the skiing and snowboarding experience this winter. Here’s a look at a handful, with the others to be covered in my next column.

Head of Patrol Jack Dant notes they had “a busy summer.” It began with fire mitigation projects in our dry late spring, which included the sale of lots of fuel wood collecting permits to remove dead wood, and thinning operations conducted on Tequila Sunrise and Big Rocks. (Check ‘em out for improved glade skiing!) He adds the ski area donated the proceeds from the permit sales to the Food Bank.

This was followed by the installation of 6,000 feet of primary power lines to run snowmaking machines, which allowed them to retire numerous on-site generators, saving energy and money while reducing the carbon footprint. “We’ve been improving our snow gun fleet, and continued that process, resulting in better energy and water efficiency.” They also purchased a state-of-the-art Tier 5 snowcat for improved grooming. In the base lodge, the restrooms got a major overhaul, as did Chipmunk Corner, and most importantly a walk-in refrigerator was installed at Totemoff’s, meaning quicker turnover of beer kegs when one goes empty. And in a major engineering feat, the haul cable on the Millennium Chair was shortened, as they tend to stretch over time.

The most significant advancement at Taos occurred off the slopes when it was certified in September as a CarbonNeutral® company by the independent organization Climate Impact Partners. Taos is working with CIP to offset its greenhouse gas emissions with projects that cut carbon and deliver sustainable developments. In addition to utilizing carbon offsets in its portfolio of carbon reduction strategies, Taos’ initiatives focus on three key areas of energy use: renewable power, electric vehicles, and efficient buildings.

“CarbonNeutral® certification is the first step in our greater goal of significantly reducing our carbon emissions without using offsets,” says Taos Ski Valley CEO David Norden. “To achieve this milestone, we conducted a rigorous audit to fully understand our carbon footprint, so now we are poised for the next steps of further cutting greenhouse gasses. While we still have work to do to achieve our reduced carbon emission goals, we are thrilled to achieve this significant milestone on our journey. This is the right thing to do for all stakeholders, including our local community and our guests.”

Resort operations like chairlifts and snowmaking are now using 100 percent renewable daytime solar power through a partnership with the local utility. Taos has also invested in 207 high-efficiency snow guns, which further reduce energy and water use. Many older buildings have been retrofitted to reduce their energy impact, while newer buildings have been built with clean energy as a priority. For instance, the LEED-certified Blake Hotel uses geothermal wells and ground source heat pumps to heat and cool the building. And, Taos has invested heavily in electrifying its fleet of vehicles, including snowmobiles and cars. Additionally, this winter, Taos Ski Valley will be the first ski resort in North America to deploy an all-electric snowcat.

Work continued on a two-year project to install a 750,000-gallon water storage tank and pump house to improve snowmaking in high-traffic areas, like at the tops of the Raven Treasure Stoke and Bonanza lifts. They also completed significant upgrades to their premier locker facility, the Powder Room. Radio Frequency Identification (RFID) gates were installed at the bottom terminals of almost all their lifts, allowing for faster loading and improved collection of skier data, including the ability to quickly locate specific skiers in case of emergencies or separation of ski groups.

The ski area’s website has been completely overhauled, a new Prinoth Snowcat was added to their fleet, and an electric vehicle charging station was installed.

Angel Fire (AFR) has focused on creating fun, interactive, entertainment opportunities for families and couples. One of its newest off-mountain activities is evening guided snowshoe hikes with stargazing tours. AFR will also host a rotating series of “snow-play activities” for kids at the base, including snowman-making contests, ice sculpture demonstrations, relay games, and snowball fights. The new Zia base bar will serve s’mores and hot chocolate, and firepits and chairs have been added. Additional nights and extended hours have been added to its night skiing program, the only one in the state.

New this year are base area lockers that operate from a smartphone, plus new overnight heated equipment storage. Many of Sipapu’s cabins sport new flooring, mattresses, and sleeper sofas for increased lodging comfort. From Southern New Mexico north, there are plenty of places to hit the slopes this winter. While Las Cruces may not be a skiing mecca, the slopes of the nation’s southernmost mountain nearing 12,000 feet in elevation — Sierra Blanca Peak near Ruidoso — lie just over two hours away, where the excellent Ski Apache resort awaits. Of course, the ski areas of Central and Northern New Mexico have several destinations for those seeking to quench their on-snow thirsts. However, … Read More People venturing into the Wheeler Peak and Columbine Hondo Wilderness Areas near Taos Ski Valley, by far the most popular areas for backcountry skiing in New Mexico, have a valuable resource — the Taos Avalanche Center. TAC was established in 2016 by Andy Bond and Rachel Moscarella. “The sentiment was that there was a real need in Northern New Mexico for backcountry avalanche information, and avalanche education programs,” Andy explained recently while sitting on the tailgate of a truck parked near the Bavarian at Taos Ski Valley, enjoying some sun and rest. For a rare ski adventure off the beaten track, residents of Northern New Mexico are lucky to have not one, not two, but three extraordinary options relatively close at hand. Though the buy-in is hefty, for a skiing or boarding experience you will recall with delight for the rest of your days, treat yourself to a day spent skiing from a snowcat in the backcountry, or even hitching rides on helicopters to access the untouched goods. Regionally, Purgatory Snowcat Adventures, Monarch Cat Skiing, and Telluride Helitrax all offer opportunities for some of the finest skiing in North America amidst spectacular terrain. 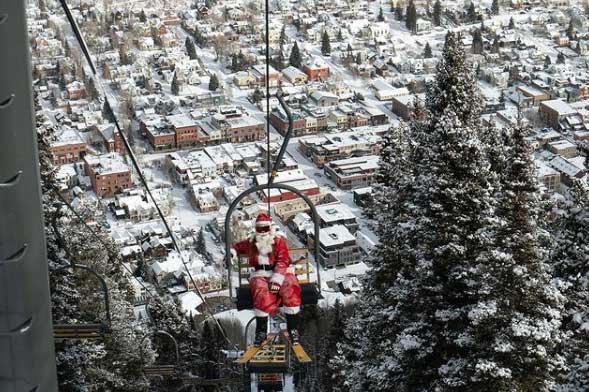