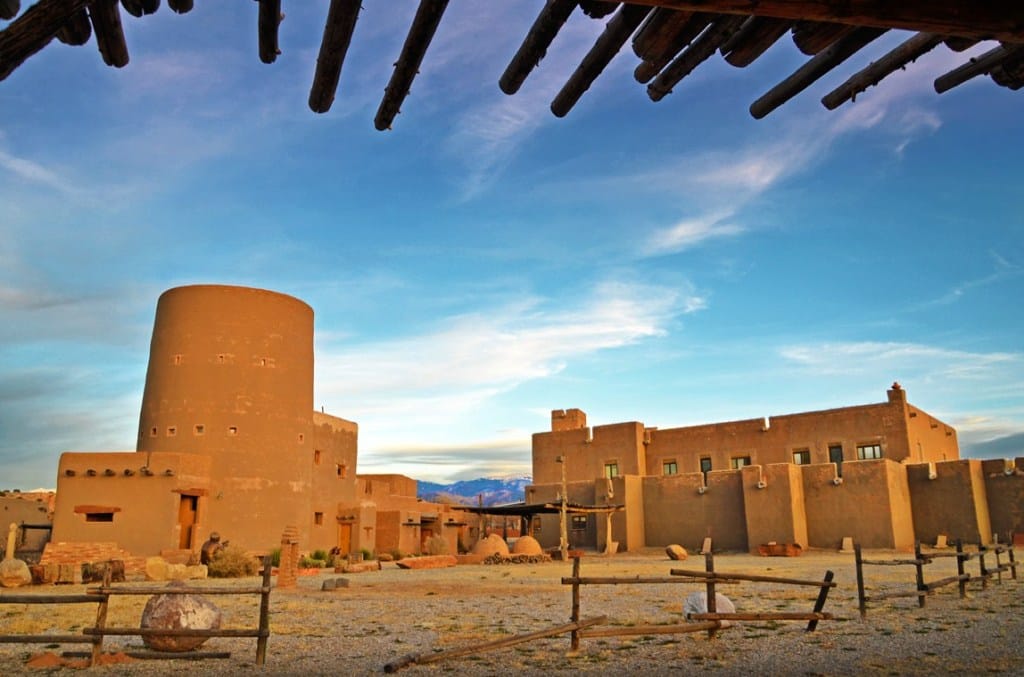 One of the earliest ceremonial centers in current-day northern New Mexico is on the National Register of Historic Places. K’uuyemugeh was a large, complex pueblo settlement from ca. 850–1150 A.D. and the site of one of the region’s earliest great kivas, measuring 52-feet in diameter.  It is one of 10 known kivas used by the pre-Columbian community that was built along the Rio Grande near present-day Pojoaque about 15 miles north of Santa Fe. Archaeology at the site has revealed “unusual ceremonial animal burials,” further indicating the site’s importance as a religious center.

“The site is a unique, well-preserved example of a rare tenth and early eleventh-century ancestral Pueblo community center, and is likely the largest, most intact, and enduring in the Northern Rio Grande Valley,” Tamara J. Stewart, principal for TAMARCH CRM said in her nomination.

Today’s Tewa-speaking Pojoaque Pueblo residents are direct descendants of the people who lived at K’uuyemugeh more than one-thousand years ago.  Their community consisted of jacales or buildings of staked poles covered in adobe, buildings made of 12” x 12” sandstone slabs and stone structures mortared with adobe.  Roomblocks two-and-four stories tall enclosed two plazas.

The great kiva was oriented to the southeast as were nine additional kivas—some rectangular—for religious reasons. There were 23 housing blocks built along low ridges primarily to the west and southwest.

“It is one of the early pueblos where Native Americans began to live together in architecturally sophisticated buildings,” said Steven Moffson, HPD State and National register coordinator.

Pojoaque Pueblo—its residents are descendants of the people who lived at K’uuyemugeh— initiated the nomination and hired Stewart to write it. It culminates decades of earlier research at the site including a ca. 1930 survey by the Laboratory of Anthropology, and excavations by one of its archaeologists, Stanley Stubbs, in 1953.

This is the first New Mexico college campus in its entirety to be designated an historic district.

Set in the foothills of the Sangre de Cristo Mountains, the Santa Fe campus is the sister campus to one established in Annapolis, Maryland, in 1784.  The New Mexico campus is historic for its architecture and its association with New Mexico architect John Gaw Meem who donated 260 acres to establish it.  The Modernist landscaping by Garret Eckbo, and interior design and art by Alexander Girard also are singled out for historic mention.

“The campus’s modern adaptation of Territorial Revival-style architecture that follows a master plan developed in the early 1960s, it being sited in Santa Fe and the school’s unique approach to higher education are historically significant,” said Jeff Pappas, State Historic Preservation Officer and HPD director.

The oldest bridge designed for motor vehicle traffic in Santa Fe was listed for its role in expanding the city south of the Plaza, and as an important infrastructure improvement that contributed to the capital city’s modernization after statehood.

Built in 1928, it replaced a bridge swept away in a 1904 flood.  It took Santa Fe County 24 years to raise money to build the new bridge, which is emblematic of New Mexico’s struggles to fund needed infrastructure in its early statehood years. The bridge is nearly unaltered and is considered an excellent example of a concrete deck-girder bridge with a rocker-bearing system, the only one in the city. Its distinct paneled railings wrap away from its entrances, creating a gateway effect that is highly representative of 1920s urban bridge design.

Although used frequently by pedestrians, there are no sidewalks on the 40’-6”-long span that crosses the Santa Fe River to connect Canyon Road to Alameda Street.

A transportation milestone, the Grants-Milan Flight Service Station, in Grants, provided critical radio communications and weather data for transcontinental flights during the Los Angeles–Amarillo leg of their journeys as part of the nation’s Mid-Continental airway system. In operation from 1953–1973, the flight station represents the government’s continued effort to ensure safe and reliable navigation for transcontinental flights.

Assembled from prefabricated panels by the Civil Aeronautics Authority with community input, the small rectangular building with a pitched roof is one of the last remaining modular buildings of its type.  It is a prime example of mid-century construction used to build important air traffic control facilities that could be assembled at multiple locations.

The building is being restored as part of the Western New Mexico Aviation Heritage Museum by the Cibola County Historical Society and will house the museum’s main exhibits. HPD provided a grant to document and assess the building’s condition. The resulting document was so well executed that the CPRC recognized it with a Heritage Publication Award in 2013.

The museum displays early aviation artifacts, including a 1929 beacon from Acomita, near Acoma Pueblo, that was part of the Transcontinental Air Transport system for which Charles Lindbergh was technical advisor. The TAT rail-and-air passenger service linked both coasts and figured in one of the earliest aviation disasters which claimed eight lives in a plane crash on Mount Taylor.

Built between 1855 and 1859, the sprawling adobe former home of James Lawrence Hubbell and Juliana Gutiérrez y Chávez was an important stop along El Camino Real de Tierra Adentro and the center of commercial life in Pajarito, where it operates today as a history and cultural center.  The house is significant as an early example of a Territorial-style rancho with its symmetrical design, vigas, center-hall floor plan and a placita, or courtyard.

“It is very important as an early example of an adobe house with a center hall plan,” Moffson said of the large hall with fireplace and furnishings.  “You don’t generally find this style in New Mexico until after the Civil War and it underscores the affluence and status of the Gutiérrez-Hubbell family.”
Ranchos, typically were built around enclosures or corrals. They were used as informal inns for travelers and places to buy or trade supplies and livestock. The Hubbells operated a mercantile and trading post and post office from the property. Commercial structures on the property were demolished years ago, but the house still faces a section of the Camino Real that is today’s Isleta Boulevard and evokes its importance as a stopping point for people traveling the first international trade route in the U.S.

At one time the property included 285 acres.  Hubbell, among the most successful traders in the New Mexico territory, grazed 100,000 sheep and his heirs raised cattle and horses, grew alfalfa and maintained 40 acres for vineyards and orchards.  Juliana was prominent locally  and considered the matriarch of Pajarito. The family owned the house until 1996 when their great-granddaughter, Louise Hubbell , passed away. In 2000 the badly deteriorated home was purchased by Bernalillo County and subsequently restored by Cornerstones Community Partnerships.

The store and corrals are gone, and the home now is surrounded by 15 acres of land that is partially leased for agriculture.  The county manages the property as part of its open space program with the nonprofit Hubbell House Alliance.

The post office appears much as when it was built in 1946 as part of a multi-million-dollar civic complex funded by the Atomic Energy Commission to replace wartime housing used by people employed by the Manhattan Project.

Architect W.C. Kruger, who designed the state capitol building in Santa Fe, was commissioned for the post office shopping complex. The post office is notable for its massing, combination of Territorial Revival and Modernist architectural elements and the distinctive ornamental thunderbird grilles that decorate each of its seven large vertical window bays. The entire complex still stands, although Territorial architectural elements were removed from the commercial buildings years ago. Santa Fe Museums and Historic Sites play a special and unique role, as museums and historic sites are concerned.  In fact, it’s no wonder that Santa Fe’s Museums are internationally recognized for their place in preserving the extensive culture and history of New Mexico.  Maybe more than any other place on earth, Santa Fe has quite the task in preserving and telling the stories of New Mexico’s arts and histories. Santa Fe is often touted as a world class arts and … Read More

If you like 1,200-Year-Old Northern New Mexico Ceremonial Site Listed in National Register ...Check This Out