La Castaneda, in Las Vegas, NM, built in the Mission Revival style, opened in 1898, and  hosted Teddy Roosevelt’s first reunion of his Spanish-American War Rough Rider troops the following year. The hotel also served as a location for the film “Red Dawn.” The couple is considering restoring La Castenada, and hopefully the new hotel will include a restaurant that matches the splendor and elegance of the Harvey House dining room,where the menu included filet of sole with cole slaw, jelly omelets with potatoes, chicken salad plates, and sandwiches made of fried eggs, pressed ham or peanut butter and jelly.

Harvey’s restaurant empire spanned New Mexico, with Harvey Houses serving up sumptuous feasts to weary travelers at La Fonda in Santa Fe, El Ortiz in Lamy, El Alvador in Albuquerque, El Navajo Hotel in Gallup and Las Chavez in Vaughn. The food was fresh, carried in on new refrigerator rail cars. A dairy in Las Vegas provided fresh milk. The food was always reasonable and portions generous. Prices were affordable, from breakfast for 50 cents that included cereal or fruit, steak and eggs, hash browns and a stack of six pancakes drenched in butter and maple syrup, followed by apple pie and coffee. Dinners were 75 cents, and featured wild game, Cornish game hens and other meat and poultry.

Like restaurateurs today, Harvey featured locally sourced ingredients on his menu, which included dishes that were popular in the region of each restaurant. In Santa Fe, for example, La Fonda during the 1920s and 1930s offered diners caviar, grilled and sautéed fish, steaks and lamb chops along with a Mexican plate with taco, tamale, enchilada, salsa and a fried egg and the popular pain perdu, or Santa Fe French toast. Other items included French fried shrimp with tartar sauce, shirred eggs with homemade sausages, roast larded loin of beef with mushroom sauce and roast spring chicken with giblet gravy and corn on the cob. Dessert, choices included pound cake, pineapple fritter with brandy sauce or cream cheese and guava jelly.

The Harvey House hotels were famous for their elegance, but none more so than the Alvarado in Albuquerque, which opened in 1902. Built in the  Spanish Mission style, the hotel featured long porches, shady courtyards and high arches. It offered 75 guest rooms, a club, parlors, a barbershop, reading and dining rooms and a connection to the Santa Fe Depot through a 200-foot arcade.

The Super Chief, which stopped at the Alvarado daily had a dining car staffed by Harvey House employees. The 36-seat dining cars had a lounge car with bar service and a waiting area. Meals on railroad cars were served on fine china and Irish linen. Often men were required to wear a coat and tie. The Superchief’s menu included caviar, cold salads, grilled and sautéed fish, sirloin, filet mignon and lamb chops. One of the Superchief’s most popular signature dish was pain perdu, or Santa Fe French toast, made with heavy cream and confectioner’s sugar.

The Harvey House legacy is rich in both legend and fact. Harvey’s restaurant chain lay the ground for the fast food restaurant chains that operate around the glove. His approach to fine dining—linen tablecloths, well dressed staff—continues to influence the restaurant industry today. Even the famous American “blue plate special” is credited to the Harvey House practice of serving a daily, low-price special on china with a blue pattern.

Nothing lasts forever, and so the Harvey House empire eventually fell. The opening of Route 66 in the 1950s was partly responsible for the demise of the Harvey chain, along with affordable cars and improved roads, which led to a drastic decrease in the number of railroad passengers. Trucking also eroded the railroad’s role as a freight shipper, leading to more of a decline in the railroad industry.

Fred Harvey died in 1901 and, according to legend, his last words were:  “Don’t cut the ham too thin.” Throughout the 19th century, mining was a major industry in New Mexico, for silver, gold, lead, and other ores. There were mining towns all across the state. The ore seemed endless, the profits sure. But change is always just over the horizon. The latest change facing ghost towns is COVID-19, but you should be safe as long as you wear your mask and follow social-distancing recommendations. Rarely do many people visit these sites at any one time, and mostly you’ll … Read More

Is San Miguel Chapel really the oldest church in the United States? It’s hard to say for sure, of course, but if you accept its 1610 building date, it’s certainly in the running. San Miguel Chapel was, in fact, built around that time, by a group of Tlaxcalan Indians who came from Mexico with the first Spanish settlement party. They settled here, on the south bank of the Santa Fe River, in what is now known as Santa Fe’s oldest … Read More

If you like New Mexico’s Historic Harvey Houses ...Check This Out 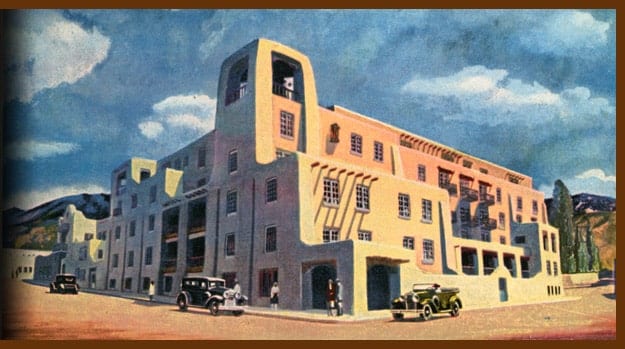